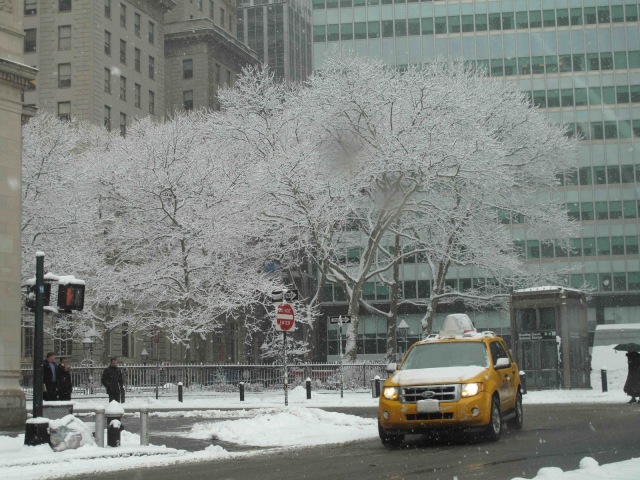 Driving is fun – when you live in the city and don’t get ample opportunity to hit the open road. Driving is not fun when you have to drive your 8-year-old son to school and back – through Manhattan traffic – three times a week. If it was just in one direction – it would be tolerable. But on Mondays and Tuesdays, I have to drive up to Riverdale from downtown Manhattan and back again – and then do the trip again about 5 hours later to pick him up. On Wednesday’s I drive him to school, but don’t have to pick him up – since he goes straight to his father’s house.

People seem shocked that I do it. Why does he have to go to school so far away everyone wants to know? (Because he’s lucky enough to be going to one of the country’s best schools while his father is struggling to pay for it.) Truthfully it’s only a 15-mile drive that in most places in the country would take less than ½ an hour. But with Manhattan’s rush hour, it’s a two-hour ride round trip.

I use ZipCar to get myself there and back. In theory, the prices aren’t so bad. About $8/hour for the small car I usually take. But 4 hours a day plus the $4 toll each way means my daily cost is about $50 to drive my son to school. The school bus for his private school is $6,000 a year. A cab would be over $50 each way. These are crazy numbers for most people, aren’t they?

I could take the train with him, but it would take over an hour and a half each way and then walk up a steep hill. For the rides where the 8-year-old is in the car with me, the traffic is usually going in the opposite direction and he only has to sit in the car for 40 minutes. On his dad’s days, they take the train because they live further uptown and it only takes them an hour.

I would think about the drive all the time. When I’m about to drive, during the drive, and then dreading the drive the next day. This is the second winter I’m doing this. Last winter, when we moved downtown and found out the school bus didn’t pick up all the way down here. I was 6-9 months pregnant doing the drive, barely able to hold my pee on the way home. My back was always killing me with the belly perched just under the wheel – but I made it. I drove him up until the very last day of school – and only then did I let myself get induced into a late labor.

When I started the drive this September, I felt lighter – no belly – but still tired in the mornings. Most of my frustration comes from the pedestrians of downtown Manhattan. Wall Street pedestrians rival those of Chinatown with their complete disregard for motor vehicles. Rambling around with a sense of entitlement, both finance junkies and tourists alike trot around with their heads on their destination or in the clouds.

While I wake up optimistic each morning, there is indubitably going to be some asshole to piss me off. I try to resist this nastiness that I know will have me pay it forward and focus on breathing and distraction exercises. I listen to the ridiculous radio shows that target the 20 – 25 year old crowd and hope my son is too into his book or video game to notice the talk of penises.

Most of the two hours I spending thinking. My brain, in the white noise, spins – I write in my head. I create scenarios and dialogue and theories and come to all sorts of realizations – all of which I can’t write down! I tried getting a transcription app for my ipod and attempted to talk into it – but the words spoken sound so differently from the words written. It just didn’t work. The good stuff would stick, I tell myself. The same characters will come to life when I sit down to type, I tell myself. The good ideas can’t be unborn.

In the winter months, we get gorgeous views of the Hudson River and the George Washington Bridge as the sky turns rainbow shades of pink, purple and orange right as the sun is going down. On our ride home last week, my son noted that the  reflection of the sunset on the mirrored buildings looked like lava was flowing down their sides.

Recently I made a vow to myself to find the bliss in driving. Like anything in life, (I’ve noticed I write that phrase a lot – “like anything in life.” I compare everything to life but the sentence makes no sense since everything is LIFE. Alas, I’ll still leave it in.) I had to realize that if I can’t change the situation (right now), I have to find the beauty in it. I had to suck up every droplet of goodness from my rides.

I have learned to enjoy the silence – and the radio personalities that keep me company. I do the easy crossword puzzle in the free newspaper (amNY) at red lights. I keep my notebook with me at all times. I delight in the “Me Time” I didn’t realize I was wasting. The calm of life – when it’s just me and my head – in a rolling metal box through the city.

Yesterday was quintessential memory day. I knew as it was happening that I’ll always remember it. Another winter storm decided to show its scary face to our city, but it was the calmer weather before the promised thunder snow storm to come later. The private school, which already had 3 official snow days, decided to remain open. The boy and I took to the roads and I drove through the worst snow I ever driven through. It was frightening, but parts of it were magical.

Snowballs the size of grapes were falling all around me, and as if within a snow globe, I drove along, sometimes as slowly as 4mph. Around school in Riverdale they hadn’t yet plowed the streets. I was driving on 2 inches of powder and hoping I didn’t spin out. I took it slow but somehow was relaxed; I had never driven in this weather before. I didn’t love it – but there was something enchanting about it. It felt like nature’s sprinkles on my life.

Every day I wake up and say thank you. I feel so blessed in my life; so lucky. If going on a car ride five times a week to bring my son to an exceptional school is the hardest thing I have to deal with, I’d say I’m doing pretty damn good.

Here are some photos from my drive yesterday. Probably not a good idea to drive and snap – but I was feeling lucky. 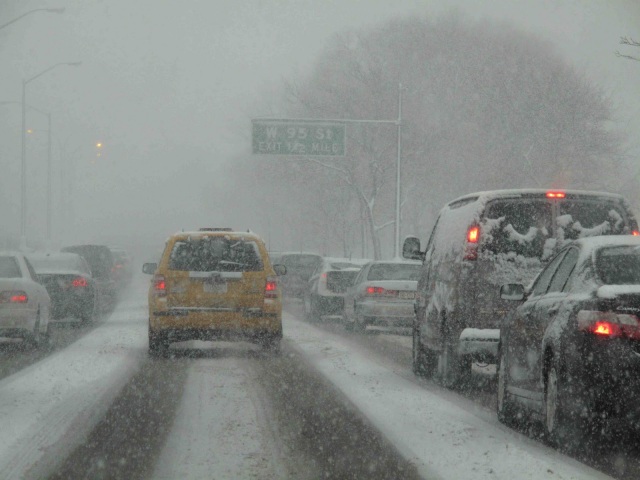 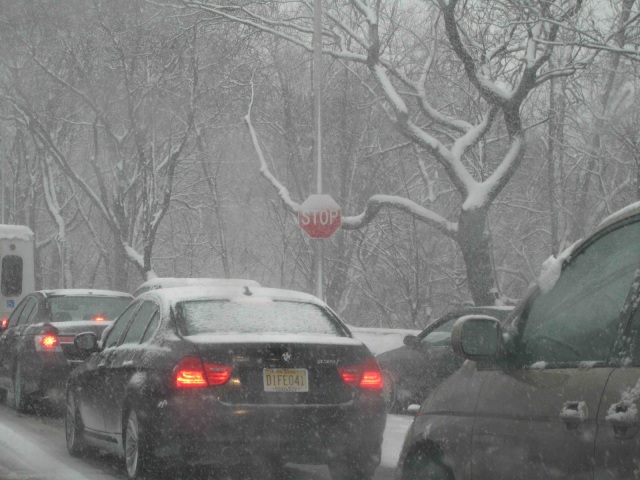