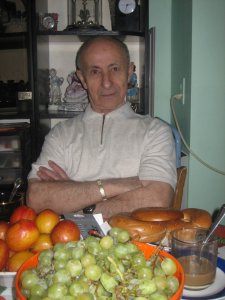 I was born with two grandmothers but only one grandfather. In nature’s rules of familial supply and demand, my Deda (Russian for grandpa) is a priceless asset; a family value very much treasured.

While my relationship with Deda has spanned the course of three decades, our one-on-one interaction has always been slightly superficial. It seems that in retrospect most of our bonding has been when he had been sick in the hospital and I had come to visit. I’ve always suspected that our bond may be different if I was a boy, but nature dealt him three granddaughters and my sister, a tomboy through childhood, quickly became his favorite.

Grandparents stories are lessons, anecdotes, a light cast on the doubt of the past. I want to learn the details of the stories that, pieced together, define their multi-hued life. These tales, when retold, should show the future generation the vivacity and the strength of the thread that held this family together.

As my grandmother recently crossed the line from cancer victim to cancer survivor, I began to scrutinize the life she lived; the life she created and shared with my Deda. I try to imagine my grandparents’ lives as an expanding quilt of vividly colorful squares, each of life’s hurdles, a new vibrant patch.

I thought hard about my Deda’s life; the family patriarch. What did I really know about him? I know some of the idiosyncrasies of his personality; things that define Deda to me – descriptive phrases that pop up, word association-style when prompted with his name.

• Deda believes in tradition. He’s loyal and he believes in right and wrong, in commitment, in maintaining strong work ethic.
• Deda drinks only coffee and red wine. The former with breakfast, the latter with dinner.
• He loves his wife and he loves his family. As the cornerstones of his life, I think those are his truths and his strengths.
• True to his Russian roots, Deda likes to boast of his tolerance for pain. After an open-heart surgery, he continually bragged how he never pushed the self-controlled pain medications. Not once, he insisted. The IV drip stood next to his bed, an unused crutch.
• Deda loves to drive. My grandmother has never learned to drive and he prides himself on being her chauffeur. It is important for Deda to have purpose, to be useful. Retirement brought him to a darker place, a light most certainly dimmed in his eyes after he no longer had a job to go to.
• In Russia, they owned both a VW bug and a motorboat.
• Deda never held babies in the traditional baby-holding way. This includes his son, daughter, three granddaughters, and great-grandson. The only way he carried children, once they were old enough, was perched on top of his shoulders, as if in a game of Chicken.
• He has had 11 surgeries, including two for throat cancer. The second throat surgery left him forever without a voice box and with a permanent stoma – a hole in his neck, through which he breathes, coughs and sneezes. When he showers, if he gets water down his hole, he’ll choke – drowning himself. Deda now speaks robotically, yet emphatically, and with limited volume control, by applying an artificial speaking device to his neck.
• During his life in Russia, my grandfather served seven years in the air force unit of the Russian military. A month of his time there was spent in an army hospital with clinical laryngitis.
• Deda had one sister who died during the Second World War. This is one of our family’s most famous retold stories.

My grandfather’s sister, Biba, was madly in love and engaged to be married when her fiancé joined the Russian army during World War II. Devoted, he sent her letters every day for a year. Until one day he didn’t. Instead of a love letter, the mail brought a death certificate.

Biba was broken hearted – a love wasted, a future shattered. Loyal to a cause that was never truly his, she enlisted as a nurse at the war front. Two months later, the entire army hospital was bombed. Another death certificate arrived in the mail.

Several years after the war, when the world was a different place – everyone was displaced, lives were beginning and ending at the same time. The knock on my grandparents’ door was unexpected. My mother, then a young child answered the door to an unfamiliar man in a wheelchair. He was asking for Biba.

It was the fiancé. He wasn’t dead but she was. A family tragedy; our very own Romeo and Juliet.

At 82, Deda seems frustrated, sometimes even defeated. A new country forced upon him, a new language permeated his world, a new job starting from the very bottom. His voice stripped, his heart weakened, his family hurting when he couldn’t always solve their problems.

His life has been a series of events that has both strengthened him and left him feeling a bit conquered. I am sure that he does not view his life as a series of conquests over incredulous challenges. I am certain that he looks back at a path of struggle that in the end, left him weaker, and often silent.

Deep down I think Deda has a freak flag – or least a trunk full of secret memories that were only his. A life he lived before us – before he started planting the roots of our family tree.

2 thoughts on “You Say Grandpa, I Say Deda”