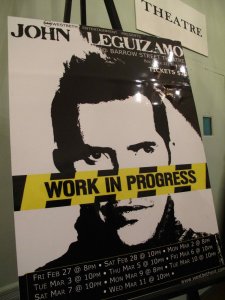 Tonight we went to see John Leguizamo’s Work in Progress at the Barrow Street Theatre.

I love John Leguizamo — particularly thought he was brilliant in his two autobiographical Broadway stints, Freak and Sexaholix. Tonight I saw him testing out his new work in a tiny all black theatre filled with 80 die-hard fans. He wore sweat pants and he was perfect.

He entered in typical outlandish dancing fashion and comfortably stood behind a simple podium with a black fold out chair and a small silver table for his bottle of beer. There was a laptop computer that was plugged into a simple photo slideshow on a screen behind him. He told us about his career as an actor — about the stories that shaped the life that now defines him. About the experiences that created the actor he has become. The show was supposed to be an hour; it lasted two.

One lady dared to get up to go to the bathroom (?) during his show. This was a theatre of only 6 rows so she walked right past John on her way out. He yelled at her for not being able to hold it. “Actors have to stand her on stage for two hours. We have to hold it. You can’t sit there and hold it?” He escorted her out and closed the door behind her and yelled to the production manager to lock her out and not let her back in.

The whole audience cracked up.

John was entertaining, honest, vulnerable and inspiring. He ended the show telling all the artists out there (especially actors) — that if we don’t like what’s out there; if it doesn’t fit what we want to do — then it’s our job to create it for ourselves.

I love a man who practices what he preaches.

P.S. This is my last blog entry in my month-long NaBloPo challenge. I chose February, the easiest month with only 28 days. I did OK, I think. I posted everyday, if not always something brilliant. Sometimes images reigned supreme over words. I committed and I did it. Small steps. Yay me!

One thought on “I Heart John Leguizamo”