French toast is one of my specialties, so when my sister said she was coming for brunch on Saturday, it was a no-brainer. I make my French Toast ONLY out of challah bread. Usually, though, I buy the bread. This time, when I realized that the Fresh Direct challah rolls were going to cost me $10 worth of bread, I thought, can’t I just make it? Millions of Jewish women have been making it for hundreds of years … can’t I join the collective baking history?

I found this easy recipe/tutorial on You-Tube. (The comments that focused on the bread, rather than the girl, were promising enough.)

The challah making process was quite involved – but mostly because you have to let it rise for 2 hours the first time and then again for at least another hour after you already braid it. The whole process took about 5 hours, although most of that time was waiting.

Here are some pictures of what the challah transformation looked like … 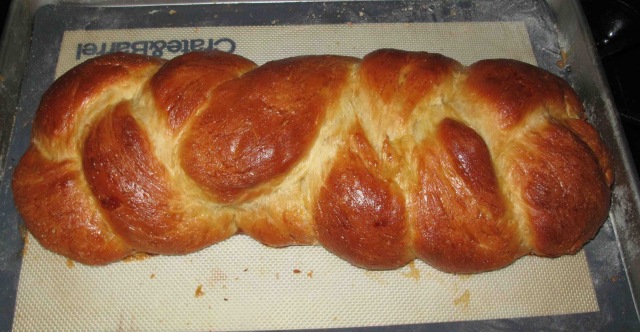 It was delicious and the consequent French Toast was amazing!