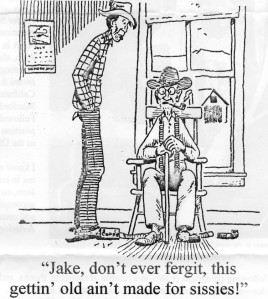 “How old are you mommy,” my six-year-old asked me recently. I’ve told him before but it must have been in another context. He’s asking for another reason. I’m not sure why.
“34,” I answer.
“That’s old,” he says.

Later that night on the goodnight phone call to his dad, I overhear him ask the same question. This time he adds a follow up: “How old will you be when I’m ten?”

Hollywood shows us a 60-year-old made to look 30 and a 16-year-old made to look 32. At home we look in our own mirrors and a 40-year-old can either see herself as 60 or she can see herself as 20. Age fluctuates; it is simply a measurement of time passed. Like your weight or your blood pressure; it is simply a number used as part of the bigger story of our body.

“Old” is more of a concept than a measurement. For instance, if it’s 40 degrees outside, is it cold? To me, yes. To an Eskimo, probably not.

Will his son, when he’s old enough to realize, one day look at him and think “My father looks old.” If your parents are “old” from the time you know them – does your idea of “old” change? Like a thermometer that was set to different defaults – where 101 is the new 98.

The idea of the older parent isn’t novel. Charlie Chaplin was 74 when he had his last child. In urbanscapes all over America older fathers are pushing their babies in Bugaboo strollers. I remember being in a Gymboree class with a woman who had twins. She was there with a grandfatherly partner but I had no idea if this sexagenarian was pa or grandpa.

My dad is an energetic and youthful guy – he shaves his head Mr. Clean-style and has a jovial yet sarcastic and cynical demeanor. (When he’s not your dad, they call this charming.) Some, his 30-year-old wife, for instance, would even say he’s cute. While he maintains a relatively mellow suburban lifestyle, he works at a physically-demanding job meant for a 20-year-old. It keeps him young, I guess. I think the job reminds him everyday that he can; the three-year-old is the exclamation point.

The clichés tell us that you are as old as you think you are. But sometimes our body trumps our mind. I hope when my brother is 15 and wants to kick around a soccer ball, my dad will still have the energy and agility to do it. He’ll be 72. I bet it won’t be as easy as when he did it decades ago with his first two kids.

Is it irresponsible of him to have a child at his age? Many people, including myself, have made opinionated sweeping generalizations. But what I’ve realized is that if a person is truly accountable for their life choices, then we have no holier-than-thou right to judge.

My father is active and exceptionally involved in his son’s life – one that would make any mommy proud. What’s the downside? At his age he’s become more patient, more tolerant, more appreciative. Recently he told my mother, his ex-wife, “I’m going to do it differently this time around. I want to really be there.” With age apparently comes wisdom. Regrets corrected.

As a sibling, I see him doting on his three-year-old in a way he never did with us. More like you’d expect a grandparent to dote on a new baby – with a new found zeal for life. My sister and I occasionally look at the new family with a sense of jealousy; why couldn’t we have a dad that was so present?

There were 31 years between when he became a daddy the first time and the third time. That was a country away, a lifetime ago. He gave himself a life do-over. “Old” would not be an obstacle to him. Why would it? Why step into sinking sand when you can walk around it?

One thought on “How Old is Old?”