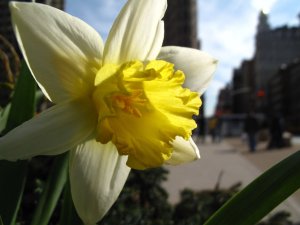 Last night was awesome – I celebrated my first night of unemployment. (Again.)

The bf and I went to this awesome art opening of Michael Albert at the Gershwin Hotel. His art is like pop music – engaging, fun and approachable. It’s colorful and clever and he just published his first book. He’s also been doing a tremendous amount of education outreach, inspiring and teaching children how to collage.

Then we had cheap falafel and saw Adventureland. (Enjoyable but the pacing of Superbad was much better. I also kept calling Jesse Eisenberg, the star, by saying that his sister was Haley Joel Osment, who I really saw in my head and I who I really meant was: Hallie Eisenberg, the dimpled, curly-haired girl from the Pepsi commercials. He looks so much like her and his performance was tremendous, by the way. )

This morning there was sunshine and I feel life’s high, like a cloud below me, as I sit with my laptop in Madison Square Park.

I told my dad, he said “Congratulations! Now I have two daughters on unemployment.” I said I was sorry. He said not to be; he hated hearing me cry. I told him I just had the small issue of money, that’s all. He said it was a big issue – in fact one of the biggest. I disagreed. I said if I don’t have health, the money isn’t going to help me. He agreed.

I told my mom, she said “Oy, now me and my two daughters are on unemployment.” Then she vocalized her secret fantasy of the three of us, unemployed, living in her Staten Island townhouse.

My sister said “Yay, now we can rollerblade in the park together. Just in time for the good weather.”

I won’t miss the dreaded work neighborhood, even though for three months it inspired my photojournalistic lunchtime sprawls.