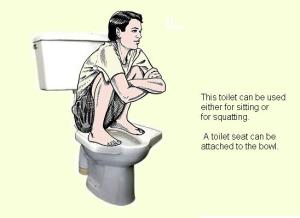 My shit stinks too – just not in someone else’s bathroom – mostly because I won’t drop my load there. How ironic for those who know me since I won’t blink an eye at a two-hour conversation discussing the merits and different kinds of bowel movements. I’ll tell anyone who listens how my nerves send me to the bowl; tests in college, a work review, my wedding day … nothing is too scared for my stomach – or its rapid release into the porcelain god.

But ever since I was young, I cannot go on public toilets. I can go number one, but not number two. When I pee on a public toilet, I always squat and never sit. It amazes me how people can just sit down, barely a wipe of the filthy seat, and unload their bowels. Instead, I’ll hold it in for a day until I get to a familiar toilet.

Ironically I’ll pee anywhere. The hesitation is in reference to poop only. I’ll pee in anyone’s bathroom, a parking lot, in the middle of Third Avenue in Manhattan (OK so sometimes the Manhattan peeing has to do with booze).

At my old job, I found a bathroom in the hallway, near the elevator where the regular people didn’t go. We called it the ‘Executive’ as if only for the privileged few. Once in the Executive, there was a lining procedure. Using paper towels, I would double line the seat. If there were no thick paper, there would be a triple layer of toilet paper.

I blame my mother – as always – for creating this neurosis. First of all, she potty trained me too young. In Russia, it was just the thing to do. I was so anxious to please the potty, the anecdote is that at 10 months, I pulled a pot out of the kitchen cupboard and took a crap in it. My mother carried a potty with us everywhere we went through immigration. Russia, Italy, Vienna, America – Galina’s toilet habits span oceans and cultures. She never let me sit on a toilet seat. She would lift me up over any public toilet seat to pee until I was too heavy to hold with my legs perched open over a toilet.

So now 30 years later I battle the toilet demons with my 7-year-old son. “Don’t touch anything!” I yell whenever we go into a public toilet. Recently he stopped coming into the women’s bathroom with me and wants to go big-boy style into the men’s room. I let him go and cross my fingers he flushes with his foot.

Incidentally, according to Australian health specialists, there is such a thing as the perfect pee.

2 thoughts on “Me vs. the Public Toilet”