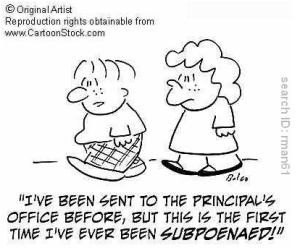 Two years ago I played the role of a good Samaritan and now I got a subpoena delivered to my home. (Two weeks after having a newborn.) Delivered to my doorman (not in my hands). Without an envelope and left for me to pick up at my leisure.

It all began on an August afternoon two years ago when after taking my grandmother to the doctor, I vaguely saw (they call this “a witness”) a woman get hit by a car. I think the car hit her foot or leg. I don’t remember the specifics and she never told me. I remember she was able to walk, but I also remember thinking she must be in serious shock. I was not the one who called 9-1-1. I don’t remember who did that.

There were others there, but nobody stayed after the initial Manhattanite gasp and chatter. The woman was all by herself; no one bothered to stay with her, assuming the authorities would take care of it. But because I didn’t have to be anywhere by any certain time, I felt compelled to stay with her.

Just earlier that year, on another midtown corner during rush hour, a much older and heavier woman had broken her fall with my knee. I remained standing still, stuck in pain, as she fell crashing forward. I stood shocked, in serious knee pain, thinking to myself, “Shit, this is more than just a boo-boo.” While everyone surrounding the fallen women jumped to help her up; I was the broken tree on the corner.

She got up and on her way, continuing uptown, someone’s eyes caught mine as I winced in pain and she asked me, “You’re not OK, are you?”

The Russian martyr in me took possession of my voice and I mouthed that I was OK. I somehow managed to hobble one block up to the bus and then up a flight of stairs to my boyfriend’s apartment. Later that night I put together a living room full of Ikea furniture, unevenly balancing on one leg. Good practice for the next six weeks I spent on crutches.

The moment that lingers with me during that incident will be the feeling of being very alone in a big city when I was in pain. Now on this August afternoon, I wanted to be there for someone who was also feeling very alone, hurt and afraid.

About a year later, or sometime between now and then, I got a call or a letter or both from someone that led me to understand that now there was a lawsuit and I was the only witness. For which side, I’m not sure.

Apparently one of them wants me to testify or give a deposition or something that sounds very Law & Order – and I don’t want to. (Nor can I as a lactating mom of a newborn.)
The reality is that I didn’t even see the whole accident; I just saw a scared woman. I’ve told them that.

Now I’m being harassed – on the phone, on Facebook, now at my home – by legal assholes or insurance assholes or any other person that fits into the ambulance-chasing scene.
It kind of made me understand why everyone else fled the scene and I was left being the only one that stayed behind to bear witness.

What kind of lesson is this perpetuating in society?

One thought on “I was a Witness?”