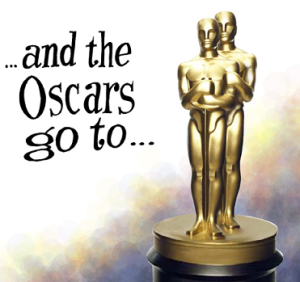 Every year around Oscar time I make a rally to see the Oscar nods. Partly it’s my way of feeling involved on Oscar night until I get my invitation to go to the live event. Partly it’s because I want to see the “best” movies.

Of the nominated bests, so far I’ve managed to see – in this order:

Overall the themes have been depressing. Truthfully I’m sad I haven’t seen Happy Go Lucky, nominated for Best Original Screenplay. It seems uplifting; almost like last year’s Juno. Recently I noted that this is the category in which I stand the biggest chance of scoring an Oscar nod. (Yes we all have dreams. I was told to dream big – and even Chris Bohjalian, my friend on Facebook, agreed I should.)

Here are my picks for some of the major categories. I have a dollar riding on these picks!

BEST ACTOR IN A LEADING ROLE
Sean Penn – Milk
I had a hard time with this one. I thought Mickey Rourke was amazing, but overall I truly think Sean Penn is a better actor. Either that, or Mickey was so good he made me believe it wasn’t as far of a stretch. I also thought it was lame that Mickey wanted to do Wrestlemania for a stint.

BEST ACTOR IN A SUPPORTING ROLE
Heath Ledger – The Dark Knight
I truly feel that Robert Downey Jr. should get this. I thought he was amazing in Tropic Thunder, but with Vegas odds clearly stacked against me, I didn’t want to risk the dollar.

BEST ACTRESS IN A LEADING ROLE
Kate Winslet – The Reader
I love Kate, pure and simple. The first movie I ever went to see as an adult all by myself was Little Children. She was so worth it. I haven’t seen the Reader yet but she was unbelievable in Revolutionary Road. In fact she was so good that when I originally posted the nominations on my blog, I mistyped and assumed she was nominated for Revolutionary Road.

BEST ACTRESS IN A SUPPORTING ROLE
Penelope Cruz – Vicky Cristina Barcelona
This is part of the dollar deal. I picked her based on odds and because I hadn’t seen any of the other nominees other than Marisa Tomei, who I think has a sick body – but didn’t blow me away on the acting front. Likewise, Taraji Henson, who I didn’t see until tonight (after I gave in my ballot) didn’t seem to earn a win. She was, however, AMAZING in Hustle and Flow.

BEST DIRECTOR
Danny Boyle – Slumdog Millionaire
Honestly I picked this because of all the hype. I thought Slumdog was great – but not the most amazing movie I’ve ever seen. In fact I was surprised not to see Revolutionary Road nominated; I felt like that movie was extremely poignant, memorable and real. It was our fears, secrets, hopes, dreams and disappointments on the silver screen.

BEST ORIGINAL SCREENPLAY
Milk
I thought Milk was a timely film. In a year where our country embraced hope and humanity with the induction of a new President, this film’s message seemed metaphoric for me. Harvey Milk started a movement that changed perceptions. I think that’s relevant now more than ever (sorry to overuse the phrase).

BEST ADAPTED SCREENPLAY
Simon Beaufoy – Slumdog Millionaire
The hype made me do it. And the Peer pressure. And the Oscar Dollar Pool.

BEST MOTION PICTURE OF THE YEAR
Slumdog Millionaire
It was a toss up with Milk for this one; I mostly filled in the Slumdog bubble because the this guy used statistics to figure out the answer. It said Slumdog had a 99% chance of winning. Those ’em some good odds.