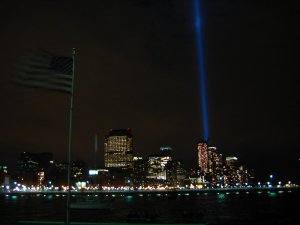 9/11 as a number, when spoken out loud, has become redefined. For most Americans, visually 9-1-1 has always symbolized emergency. After September 11th, 2001, 9/11 represented a day that surpassed emergency.

It became a day I wouldn’t forget as it happened in real time. Soon it evolved into my generation’s JFK question: “Where were you on 9/11?”

I remember the day in bits of pieces, blurred by the tears. I cried for the victims, for the city, for the country, for the state of human race, for our future. I remember being afraid, as if it was hyper-real and I was watching it from above.

I walked across town to work beneath a sun-filled sky. I stopped at Starbucks for my decaf and my cinnamon raisin bagel with cream cheese. I never tasted the bagel that morning.

I barely started clicking through my morning emails when my co-worker started gasping and shouting out loud about the first plane. Her ex-husband had worked at Cantor Fitzgerald.

We tried to keep up with the alerts on the computer but this was before streaming video was good enough. We tried calling those at home for TV updates. We tried to tune the radios into something audible. The sirens wailed outside. The phones were unusable – a constant busy sound. There was panic even in the dial tone.

I was living through an exaggerated action movie. The first tower fell. The second tower fell. They were closing all the bridges and tunnels; all the airports. A plane crashes in Pennsylvania. We sat afraid of the next announcement – what was going to be next?

I didn’t trust anything I was hearing and like most of the world, I hovered in a state of disbelief, shock and sadness. Carrying a 10-week pregnancy that no one knew about, I wondered about the new world my child would now know.

Everyone has their version of the morning’s perfect weather, where they were headed, what they ate for breakfast, where they were glued to the TVs. Images that have become immortalized onto our brains. Planes crashing, towers falling, epic rescues. The uniformed officers, the unnamed victims, the unexpected heroes.

At work we huddled; a family forced together by a funeral. We bonded by virtue of experiencing the event together; watching a historic tragedy unfold before our eyes. We abandoned the office by mid-morning after all of the planes stopped crashing.

It was about 5pm when my group decided to split up and try to get home. It was easy for me – I had to walk from 40th street and 9th avenue to 27th street and 3rd avenue. My only concern was that I had to walk by the Empire State Building. I remember that being a valid concern. I was afraid that they might target it next. I remember waiting until enough time had gone by for them to land all the airplanes.

I lived across the street from the Park Avenue Armory, where people were directed to report so that they could register their missing relatives and family. They were ordered to bring in hairbrushes, toothbrushes; anything from which they could pull DNA. In the days that followed I would come downstairs to news trucks with satellite dishes on their roofs. I used to walk the dog around the corner and see the countless screaming, crying, disbelieving, hopeful souls.

There were posters, pictures, flyers, signs everywhere. On brick buildings, on glass buildings, in store fronts, on lamp posts, on fences, on street signs. The signs were silent but they pled to us. “Did you see my dad? Have you seen my mom? Last seen in Tower 2 … ”

I had resigned to their deaths but the sign hangers were still thinking they would find loved ones wandering around confused in the streets of Manhattan. The sheer hope they felt was the polar opposite from anything I was feeling. Like magnets on either sides, the more they hoped, the sadder I got.

This surreal experience would warrant an arduous healing process. A city in mourning, we had lost so many and had left countless others grieving. New Yorkers are all connected, we all knew someone or knew someone who knew someone that was in the Towers, or in the area, or on their way to the area. It could have been any of us. We all replayed in our minds the last time we were there. Downtown. In the Towers. We all thanked any higher power that it wasn’t us.

The volume had changed; people were whispering over the hush of death in the air.

Our appearance had changed; the face of our city was broken. We lit candles and made impromptu tributes out of pictures, flags, pins, flowers. Every firehouse became a memorial.

We felt different. We were kinder. We were more humble and more giving. We volunteered. We were more nationalistic and more understanding. We had a common enemy, a common anger, a shared pain. We became both more aware and more apprehensive of the world around us. More fearful and more educated.

Fear is a weakening thought; without it the terrorists wouldn’t have had a playing field. By instilling fear in us, they have trumped us – converted their terrorizing bishops into kings – because we gave them the power to do so.

Two years later I found myself at a new job in a high rise building in midtown, not far from the United Nations Building. I had a windowed office looking out onto 42nd Street. Since we were close to the East River, I saw my share of airplanes from my window. I never understood why they allowed planes to fly over the city again, but by the same token I didn’t want the city to become a slave to terrorist fears. Nonetheless, every time I saw a plane coming too low, too close, too fast … my heart skipped a beat and I held my breath.

It was about one in the afternoon when the fire alarm went off. We waited for the announcement that usually followed. Instead of the typical “please ignore the testing of the fire alarm system,” we got “PLEASE EVACUATE THE BUILDING IMMEDIATELY!” No one questioned it. We gathered our bags as fast as we could and galloped our way down 14 flights of steps, each flight increasing our heartbeats, each flight closer to safety. The fear was palpable, like a thickness in the air. We exited the building through a side entrance and sprinted as far as possible from the building.

It turned out to be an unattended attaché case with an ipod wire sticking out. They thought bomb. I don’t mind how many times they have to cry wolf, I was running out each and every time.

I lie in Central Park, my body sinking deeper and deeper in the late summer thick grass. My eyes are closed tightly but I’m staring into the sun to see the psychedelic patterns and colors. I hear the hum of an airplane, and then feel the shadow of the plane over the sun. I squint my eyes open and see the plane flying overhead. I take a breath and hold it until it passes.

I don’t think that I have post-9/11 syndrome. It’s not exactly a post-traumatic syndrome.

Life is traumatic and after any such experience we live differently. Like a child who discovers for the first time that their parents are fallible, we discovered as a nation that our country wasn’t perfect.

There are many countries whose citizens exist with a consistent overwhelming dread of war over their heads. Americans, however, are born with our freedom. We don’t know or expect anything else. It’s our right, our privilege, something we often take for granted.

To some, 9/11 created a new way of existence. My mother does not leave the house on 9/11; it’s her personal way of remembering the day. For me, 9/11 was like a vaccine. Every year I go directly to the site of the accident and remember what was there; visit the grave that doesn’t formally exist. I am not afraid of the day, for I feel that I have gotten my little dose – my immunization from the terror.

Remembering the day still feels like watching a succession of tragic images through a virtual View-Master. We were forced together as New Yorkers, as Americans, as victims, as survivors – and we bonded over a shared human pain. Together we watched as our city (and our country) took a beating.

But rock-by-rock, person-by-person, steel beam by steal beam, we cleaned out the death and replaced it with promise, with hope, with future.

There are days in our lives that are extraordinary to all of us. Monumental days like the day we met the love of our live; the day our children were born; the day we finally got to wear the cap and gown. But 9/11 became a collective memory. A day when everyone knew someone … and everyone was someone to you. The day American united.

One thought on “Eight Years Ago, Our Lives Changed Forever”